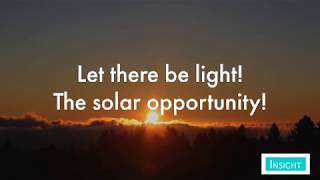 Business opportunities in the growing solar sector in Sierra Leone.

A new series of short videos from Better Business SL will focus on market opportunities in Sierra Leone. Better Business SL is an initiative to encourage dialogue about the opportunities and challenges facing the private sector in Sierra Leone. It is a collaboration between Adam Smith International (ASI), Insight Media and Communications, the International Growth Centre (IGC) and Africa Young Voices (AYV). #solar #Energy #Electricity
24 views0 comments
Memuna Forna, Editor

Plans for the first phase of the Bumbuna hydropower project were unveiled in 1975. Eighty-five percent of construction was complete by May 1997, when it was halted because of civil war. The project was restarted in 2005 and was eventually completed in November 2009. Almost eight years later, in August 2017, Joule Africa signed a 25-year Power Purchase Agreement (PPA) with the Government, for electricity from a 143-MW expansion of the 50-MW Bumbuna station. It was an importan
50 views0 comments